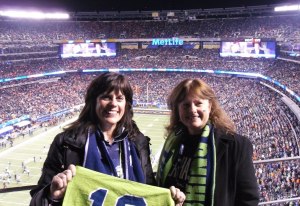 My sister and I ready to cheer for the Seahawks in MetLife Stadium at Super Bowl XLVIII.

Now that 12 days have passed since my beloved Seattle Seahawks won the Super Bowl, I’m finally able to focus on life outside of football.

Granted, the Seahawks have been a part of my life for more than 30 years, so it’s no easy feat for me to put their recent monumental accomplishment aside. But, smiles and joy alone don’t pay the bills, so I’m forcing myself to focus on my latest venture…my communications consulting business.

But first, can I just share with you how fabulous it was to be in MetLife Stadium cheering for the Seahawks as they won their first Super Bowl? I’ve never yelled so loudly with the 12th Man. I’ve never danced or jumped that much as a fan. I still can’t wipe the smile off my face.

It was sheer jubilation. Chanting SEA-HAWKS! L-O-B! Omaha Omaha! (Haha!) Bouncing with the sea of 12s to Macklemore’s “Can’t Hold Us” after every score. It was pure bliss.

I couldn’t have scripted a better game. Twelve seconds into the game Denver’s ball snap went awry, right in front of us. From there the Hawks kept scoring and scoring and scoring. The 12s kept cheering and jumping and dancing. It was camaraderie at its finest.

I love the personalities on this Seahawks team – the class of Russell Wilson, the spunk of Richard Sherman, the determination of Doug Baldwin, the confidence of Golden Tate. From the beginning of the season I felt this was their year. I love these Hawks!

Congratulations to the Seattle Seahawks! You deserve to be World Champions. I feel so blessed to have shared your magical win with you.

Can we do it all again next year?

Okay…now I’ll get to work.

Can anyone use the services of a smiling communications consultant with a Seahawks hangover?