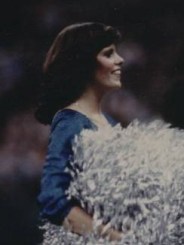 A Seattle native, football fan and dancer since age three, it was only natural for me to become a Seahawks cheerleader. I was a Sea Gal for three years and then became the Sea Gal Choreographer for the next three years. Several years later I was recruited to lead the Junior Sea Gal Program. I also was honored to sit on the judging panel at Sea Gal auditions for 21 years.

I represented the Seahawks for many years in a public relations role as a Sea Gal, Sea Gal Choreographer and Director of the Junior Sea Gal Program.

As the Director of the Junior Sea Gals, I was responsible for creative marketing and promotion, public relations, event planning, coordination, video production, accounting and communications.

I currently am the Sea Gals Alumni Coordinator, where I oversee the Sea Gal Alumni Facebook page and organize alumni participation in charity events throughout the community.